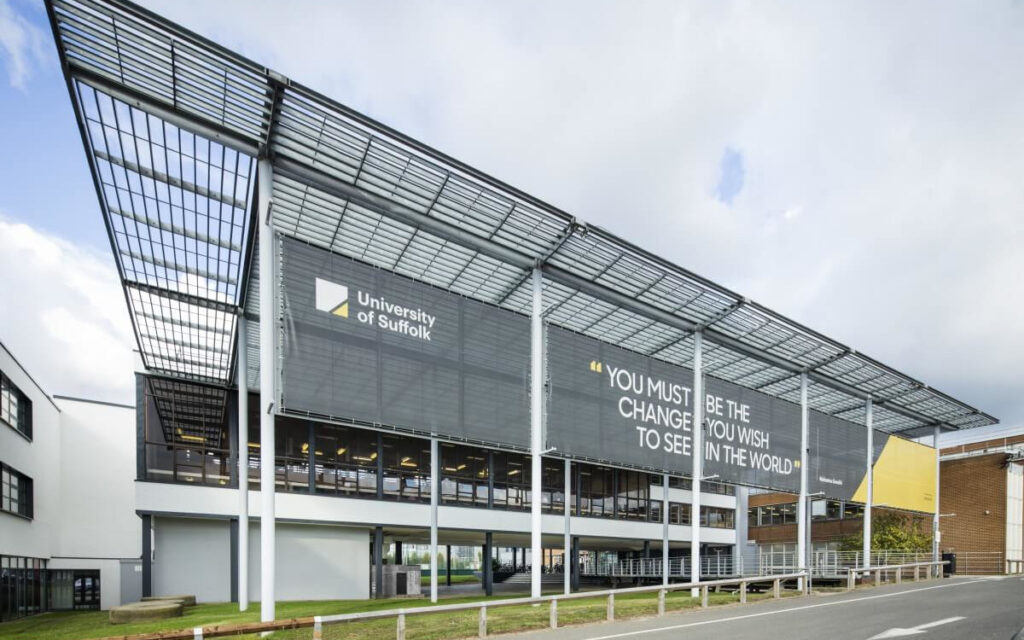 Study at the University of Suffolk

Established in 2007, the University of Suffolk began as University Campus Suffolk (UCS), but gained its current nomenclature when it was awarded university status in 2016. The University of Suffolk has five sites, with its central hub being in the eastern English town of Ipswich and satellite sites in Lowestoft, Bury St. Edmunds and Great Yarmouth (although this is in Norfolk, rather than Suffolk). It is divided into six schools which are the school of law and social sciences; the school of health sciences; the school of psychology and education; the school of science, technology and engineering; the school of arts, design and humanities and the Suffolk Business School. These schools offer a range of traditional postgraduate and undergraduate courses, as well as in less well-known areas such as cybersecurity and computer games design.

It is attended by some 7,700 students from over 70 different countries, with its main campus located on the Ipswich waterfront. As the centre of the hub, it boasts three lecture theatres and 34 smaller teaching rooms. As well as the Waterfront Building, there’s the James Hehir Building which is six storeys high and houses the library and cafe facilities. Student on-campus accommodation is available at the 600-place Athena Hall

According to Times Higher Education (THE) World University Rankings 2021, the University of Suffolk is ranking at 401- 500 in the world.

The University Campus is based on the Ipswich waterfront. The Waterfront building, designed by RMJM Architects is the centre of the hub, opened in September 2008 and cost £35 million. It has three lecture theatres and 34 smaller teaching rooms. The six-storey James Hehir Building was officially opened in March 2011 at a cost of £21 million It is named after the former chief executive of Ipswich Borough Council and includes Cult Cafe. Campus North houses the library or “Learning Resource Centre”. Onsite student accommodation is provided in the 600-place Athena Hall, located adjacent to the James Hehir building.

The University of Suffolk is also home to the East Contemporary Art Collection, which is housed at the Waterfront Gallery and was founded in 2013 as the first public collection of contemporary art in the east of England. All artists with work shown there have connections with the seven eastern English counties and include the likes of Maggi Hambling, Susan Gunn, Justin Partyka and Linda Ingham.